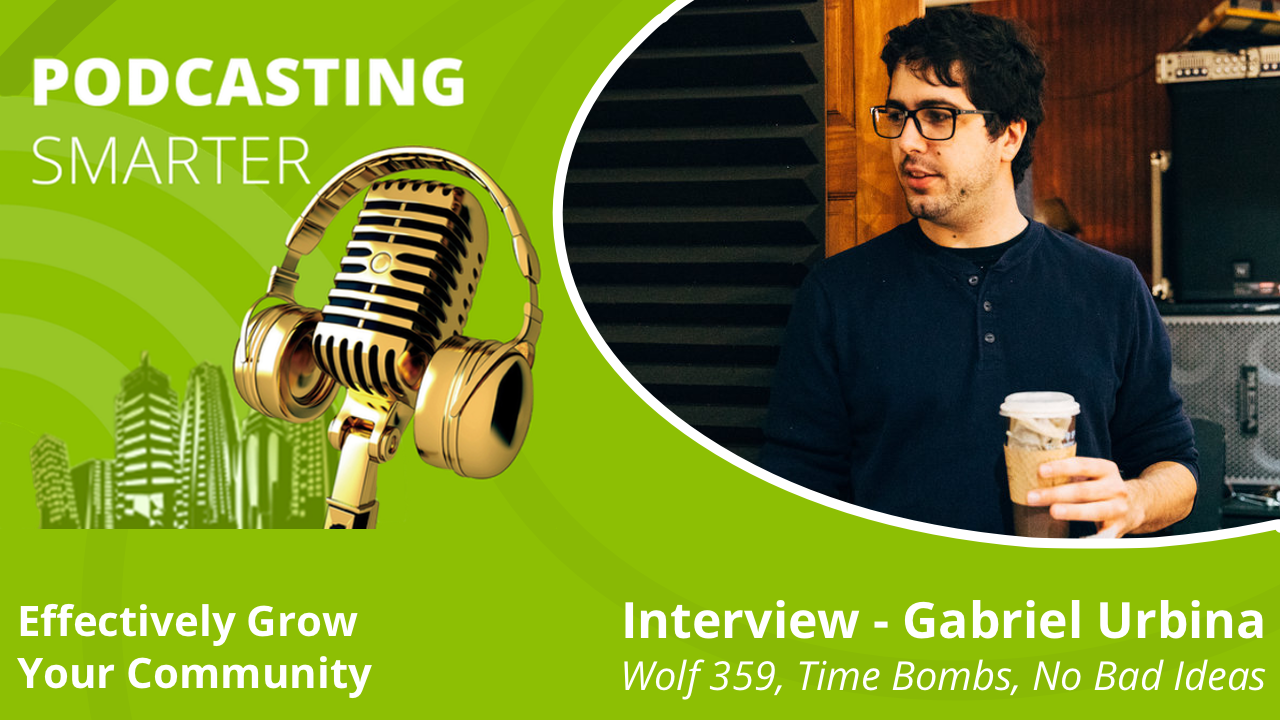 You can have the most state-of-the-art equipment, the most professional audio processing software, and the best podcast host in the game, but that doesn’t mean anything if your podcast doesn’t get listened to.  You should always create for yourself, make something that you’re proud to go back and listen to at the end of the day, but the biggest draw of podcasting as a medium is the idea that you can share the stories you want to tell with the people around you and interact with them as they experience your content.

Best known for Wolf 359 (an audio drama about the dysfunctional crew aboard a space station orbiting the star Wolf 359), Gabriel wasn’t afraid to try new things with his show.  Which meant he wasn’t afraid when those new things fell a little flat.

“It was really completely organic, to the point that we were surprised when it happened, kind of.  Me and Zach Valenti and Sarah Shachat and the other people that worked on Wolf 359, when the show first started, we tried a couple hair-brained experiments.  Like, Oh, we’re gonna do guerilla marketing, we’re gonna get people listening, and it’s gonna be awesome!  And none of it worked.  People left. If anything, people were curious to listen to the show, but now?  No, I’ve been annoyed, I want to leave.”

Despite the initial audience of Wolf 359 being on the smaller side, he kept putting his all into his creative team, and his writing.  And when his show finally blew up, it was on the same site that boosted Welcome to Night Vale: the micro-blogging platform Tumblr.

“Kind of in parallel to that, a really amazing, really dedicated, really really attentive and creative and insightful kind of fan community grew up on the Tumblr-sphere . . . and on the Twitter-sphere.  But it all kind of happened around us, and one day somebody told us, “What do you guys think about this conversation that is happening, and we were like, There’s a conversation?”

Over the course of its four-season run, the show amassed over six million downloads.  At its height, it earned over $3000 per episode via Patreon, and inspired countless artistic exploits including animated trailers, comics, and 3D art.  But no matter how big it grew – or maybe because of how big it grew – Gabriel and the team he’d built to back Wolf 359 kept the heart of the show the same.

“We did a podcast for a year and a half, and we tried our best to make it good.  And everything that happened around that grew out of that. We were making it with this ethos of, “We are doing exactly the show we want to make,” which means we are putting in all the weird things we love, all the quirkiness, all the oddity, and all the wild swings from comedy to heartbreak.  And we really made it with a little bit of this attitude of, well it’s what WE love, you know, it’s made so niche and so tailored for the cast that who knows if anyone else will really jive with it.  It may be too specific to find an audience. But no, it absolutely did find its audience.”

You can check out his site here, where you can learn more about Wolf 359, No Bad Ideas, and his other creative endeavors.  And don’t forget to check out the full interview (recorded at Podcast Movement!) to learn more about what sort of impact community and collaboration can have on your podcast!