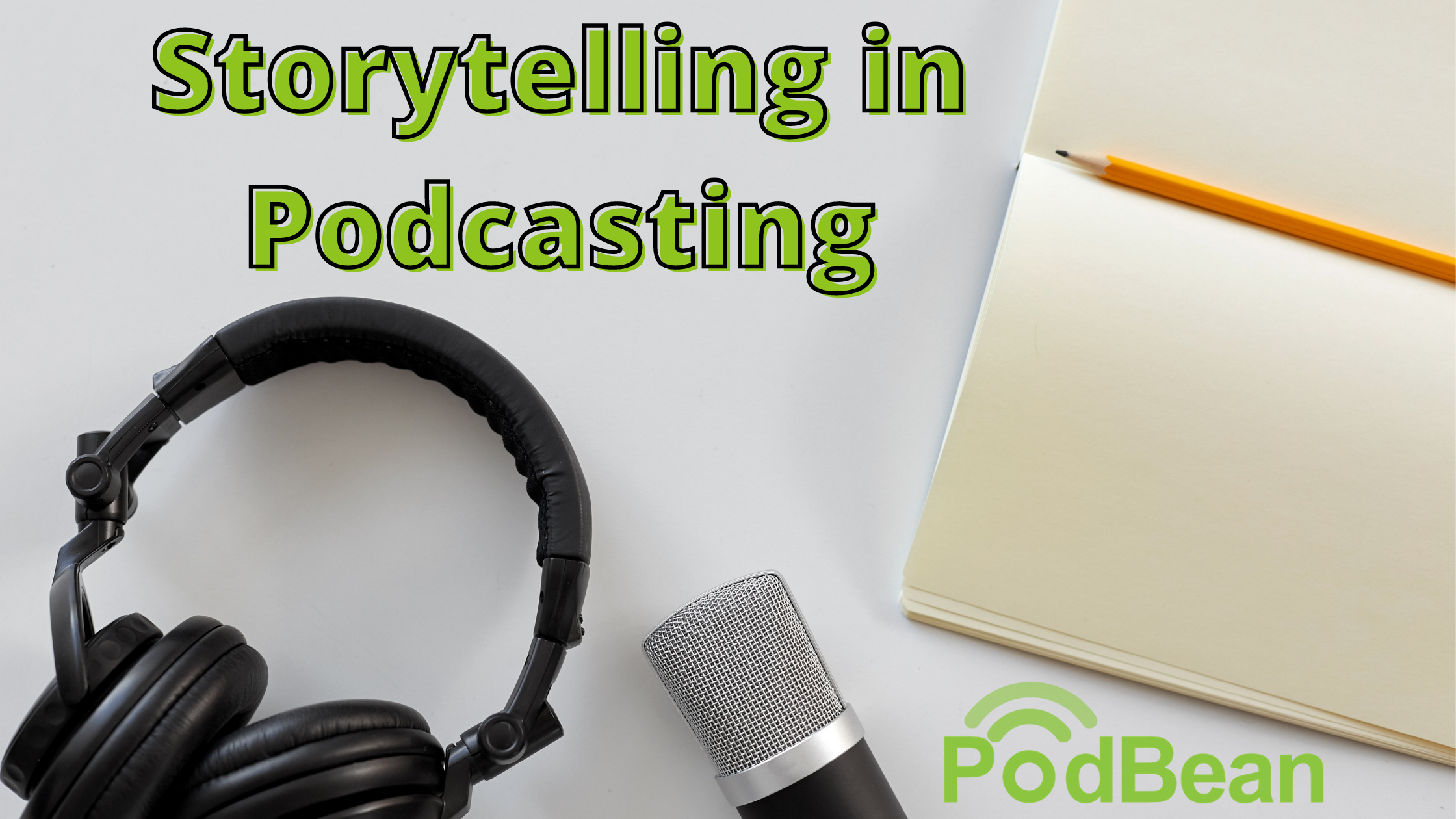 Human brains are wired for storytelling; it’s a mode of learning that we’ve adapted since cave paintings and shadow puppets. Storytelling came about as a way to teach each other about our history, about any dangers awaiting us, things we want to celebrate, and more.

When we talk about storytelling, especially podcast storytelling, it’s common for confusion to be a primary reaction. “I’m running a podcast on pop culture/sports/talk show topics/wrestling, what story am I supposed to tell if I’m covering a real-life topic? Isn’t storytelling what you do when you’re making something up?” When you’re running a podcast like that, your first concern is reporting the factual truth as well as your respected opinion on the topic. Exaggerating the truth is the opposite of what you’re going for.

But storytelling is far more than making things up. According to psychologists, we’re 20 times more likely to remember facts presented in a story than in less-structured formats.

Think about it – what sticks with you more:

“I was given a counterfeit bill while running a Girl Scout cookie booth, and lost a day’s earnings from my job.”

“I was a Girl Scout leader and on the very first shift of cookie-season, I had worked my first shift as a server so got to the booth late. We’d been rushed to set up the booth, and we were still trying to get organized when a woman came up with a hundred-dollar bill and the desire to spend $20 on cookies. We didn’t have change at the time, so I volunteered my day’s earnings thinking we’d easily earn the money back. But as the woman walked away, we took a closer look at the bill she handed us and realized it was fake. We tried to chase her down, but she was nowhere to be found. Whether or not she knew it was fake, we’ll never know, but at the cookie booths after that event, we had money-checker pens available for every bill.”

The first example tells you what happened in a no-nonsense sort of way, with an emphasis on the direct actions that happened. But the second example (a true story backed up by news articles, actually!) lays out a scene that has a beginning, a climax, and an ending. It paints the picture for you so you have a better idea of what occurred, and in turn, provides more room to capture attention in search of an emotional payoff.

This is what storytelling can do to strengthen any type of podcast and make it more engaging for listeners. Here, we will lay out what elements make up a story, and how to incorporate storytelling elements into your podcast to ensure that your audience finds your podcast engaging and entertaining.

What is a story?

According to the Oxford dictionary, a story is “an account of imaginary or real people and events told for entertainment.” What we’re going to focus on is the word entertainment. Even if you’re presenting the most factual, dry information on history or science, if you’re producing a podcast, your main goal is to be entertaining enough to draw in an audience and keep them for the length of your episode (and for the next episode, and the next one, and so on and so forth).

In regards to entertainment, remember that what entertains you will undoubtedly entertain your audience as well! Your audience isn’t just tuning in because of the topic you’re discussing, they’re tuning in because they specifically want to hear you discuss it! And by utilizing podcast storytelling, you’re leveraging more tools to ensure that you’re creating engaging content. Podcast storytelling isn’t about changing your content, it’s about presenting it in a way that creates a delightful and engaging experience for your audience.

It’s All About Structure

Anyone interested in writing, creative or otherwise, will have heard about the “shape of a story” in a dozen different ways. As your podcaster behind the screen with multiple degrees in English, I can verify that of the multiple dozens of craft writing books I have on my desk, the majority of them will focus on the “shape of a story.” And as your friendly neighborhood podcast specialist, I’m going to give you the details so you don’t have to go out and register for a creative writing class or purchase multiple dozens of craft writing books. (Unless you want to, of course, in which case I’ve linked a few of my favorite craft writing books at the bottom of this post!)

This shape is commonly a triangle known as a Freytag Pyramid. Joseph Campbell popularized the “story cycle” but that’s a completely separate concept that’s more suited for fiction writing, so we’re going to focus on the triangle.

No matter what story you’re telling, you’re going to need:

Everything from comedy routines to songs to the four-panel Sunday comic panel utilize this structure. Some great examples of this structure:

So let’s break down each part of the story, talk about why they’re necessary, and what each one will look like in your podcast.

This is the beginning of your joke, the beginning of a song, whatever lays out the scene and characters for your audience. This is your version of “Once upon a time, Cinderella was treated like a servant in her own home by her stepmother and two step-sisters.” This is where John Mulaney tells the audience about the Salt and Pepper Diner and how he’d go there with his friends before he dives into the one particular trip the story is on.

Basically, the exposition phase of your podcast episode is where you lay out your topic but in a specific way that gives all the information on the people and places involved, but also sets the tone for your entire episode.

The complication stage is where we lay out what situation is occurring to give us the stakes and needs to be solved. This is where Cinderella hears about the ball and all the mice proceed to sew her a dress that gets torn to shreds. This is where John Mulaney tells us about the jukebox and starts pumping in quarters and selecting “What’s New Pussycat.”

Note, however, on the picture above how “complication” is the entire uphill side after exposition? The complication stage is where we also keep escalating everything until it comes to a head. In a longer story – or a longer podcast episode – we’ll get multiple instances of complications resulting in a smaller climax. These little emotional payoffs allow for more tension to be gained for the main climax at the end of whatever story you’re telling. Cinderella, for example – we get the complication of her not having a dress, but the payoff of the mice sewing one for her, but then we get the complication of the dress being destroyed, leading into the payoff of the fairy godmother making an appearance.

What does the complication stage look like in podcast storytelling?

This is the third panel of your four-panel comic. This is where everything culminates into the main point of your story. It’s the last bit of a joke before the punchline with the punchline following soon after. This is “It’s Not Unusual” rolling back into “What’s New Pussycat?” and a patron of the Salt and Pepper Diner absolutely losing it.

Your climax is going to be the big, emotional punch of the story. Everything has been leading up to this part, which is the point of the story. If you’re telling the story of meeting Bigfoot, this has to be the part where you meet Bigfoot.

If you’ve kept your tone and your point of view consistent throughout the entire thing, no matter what happens next your audience should find enjoyment in it. We mention this because there’s been a trend of trying to artificially create or shoe-in an ending that surprises and shocks the audience, instead of giving them the conclusion with a more natural arc that provides emotional catharsis for the audience. (This leads to disingenuous storytelling, where the desire to tell a story to entertain twists into a desire to almost punish the audience for investing so much emotionally into the story.)

Even if your audience is guessing the end to your story, you need to continue on the path of the story you set out to tell. An audience that’s guessing at the ending is an audience that’s not only paying attention, but absolutely invested enough to keep thinking about your story to wonder where it’s going. And that’s something to be celebrated, not derided.

What does the climax stage look like in podcast storytelling?

The denouement is where we release all the tension from the emotional catharsis that was the climax. It’s the, “and then they get married and live happily ever after” part of the story, where you tell us the fallout of the main point/event and tie off the ends of the story. It’s the last few lines of John Mulaney’s bit, where he tells you the fall out of his adventures in the diner and what lesson was (or wasn’t) learned.

The denouement is where you bring everything back to the baseline tone set in your exposition, and bring the audience to the of end the story. Looking back at the pyramid story structure, you can see it’s where we’re coming down from the high of the climax. If we just left everything as is, and ended the story at the climax, we’d be frustrated not knowing how things happened next. So with the denouement, you’re giving us a few details about what happened post-climax, so we know how everything came together.

What does the denouement stage look like in podcast storytelling?

Who Can Benefit from Podcast Storytelling?

Stats show that pieces of media – from podcasts and movies to commercials and social media posts – resonate more with people when they invoke some level of storytelling. (Look at the culture and hype around the Super Bowl commercials, for example.) So no matter what type of podcast you have, utilizing storytelling elements in your podcast will go a long way in increasing your audience and podcast engagement.

And even without realizing it, you may already be engaging in the above storytelling structure. When you tell jokes and stories on a discussion-based show (as opposed to a more scripted show), you, your cohosts, and your guests might naturally fall into the storytelling structure because it’s that ingrained in our interactions, thinking, and culture.

A Final Word on Stories

Storytelling acts as shorthand for things to learn about, warn of, and celebrate – and has for as long as humanity has been learning, warning, and celebrating anything. It is the schema by which we organize our thoughts, our selves, and even our lives. So it’s only natural to feel more engaged and involved with the media in our life that follows this structure.

By thinking about podcast storytelling, and how to utilize such an organizational tool for your podcast, you can begin to identify ways to possibly improve the flow and add elements to enhance engagement. We can all benefit in one way or another from these principles since storytelling is so built into who we are as humans. The important thing to remember is that there’s no wrong way to incorporate storytelling into your podcast, and that it’s okay to experiment with different styles and methods of storytelling to see what works best for you.

4 comments on “Storytelling in Podcasting”