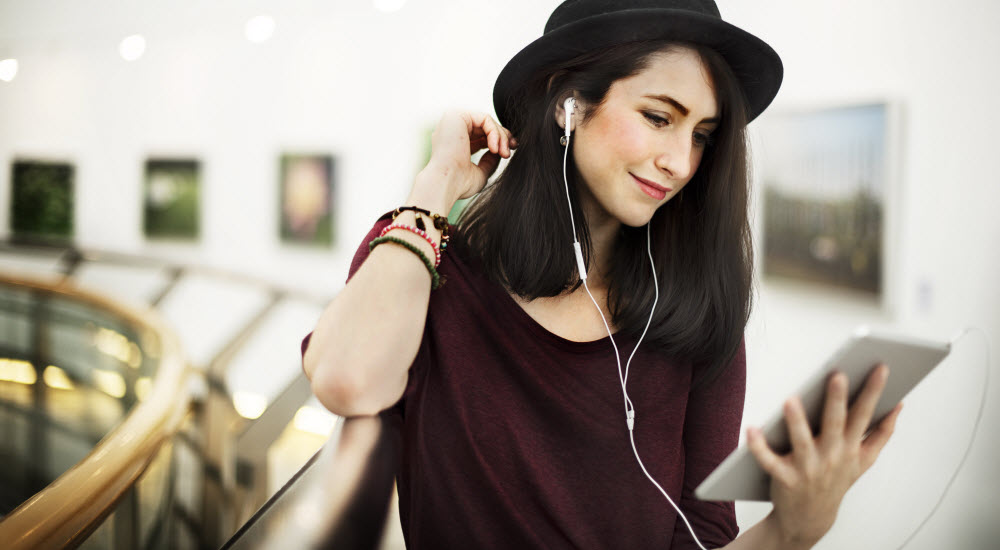 Mack Weldon, a company that specializes in men’s socks, underwear, and shirts, spends 25% of their monthly ad budget on podcast advertising.  Why?

Because they doubled their sales with a singular ad on the comedy podcast Comedy, Bang! Bang!

The ad itself is a live read during one of their shows, and featured Collin Willardson (Mack Weldon’s marketing manager) playing as an underwear model while comedian Paul F. Tompkins pretended to be a Mack Weldon executive and poked fun and teased him.  The live read is over seven minutes long, but despite its length, it sent listeners in droves to the Mack Weldon website.

So now a quarter of their monthly budget goes to podcast advertising.  They still use visual ads, of course, but there’s an added facet that drives them to continue to use it – including the lack of competition for attention during the ad slot itself.

“We paid for native and display ads on online publications before, but we found that readers could easily get distracted by 48 things on the homepage,” says Willardson.

But monetization has more effects than just hyping up the person who is sponsoring you.  Take a look at the popular sci-fi radio-drama podcast Wolf 359.  At its height, it was pulling in $3,500 a month (enough to pay its voice-acting crew and pay for the studio space), but by monetizing their podcast they were also able to grow as a people beyond their podcast.  “I’ve gotten some of my best paid voiceover gigs because someone knew my name,” says Zach Valenti, one of the main voice actors for the show.  Even Welcome to Night Vale, one of the longest-running sci-fi podcasts, started as three guys recording with Audacity in someone’s apartment and grew to a show that tours internationally through the power of podcast advertising and monetization.

There are millions of reasons to monetize your podcast, but that should never be the question.  Your question should be, “What can I do to make sure my advertising is as beneficial as possible?”

In its current state, podcast advertising is a market that can only grow.  According to a study done by WARC data, spending is expected to increase to 1.6 billion dollars by 2022 if it keeps track with its yearly 4.5% growth from 2018 to 2019.  Compared to 2017-2018’s growth of a mere 1.9%, it’s clear that it is profitable enough to have advertisers and sponsors make more room for it in their budget.

But what are the listener’s opinions?  1 out of 3 people listen to podcasts worldwide, with varying degrees of the same stat across generational lines.  And most listeners have stated that they’ve taken some form of action after hearing podcast advertising, from purchasing or investigating a product to reaching and following a brand on social media.  The podcast as a medium is changing how people consume and interact with content, and that extends out to how they consume and interact with the advertising.

As stated before, it should never be a question as to why you should consider this – monetization is its own reward, after all – but what is the best way to do it?  It is, after all, another level of responsibility beyond just producing your podcast, and you’d hate to put in a whole lot of work just to find out that there might’ve been a different path to take.

Thankfully, that’s where this article comes in.

One of the first steps to advertising is to find someone to advertise on your podcast.  There are two main routes to go for when it comes to podcast advertising: you can either find a sponsor on your own, or you can have your hosting website help you find advertising.

The one that’s easiest for newcomers would be to have your host site help you find the advertising.  Hosting sites like Podbean offer something akin to an ads marketplace, where you can opt in to the service and have the ads inserted at points in your audio preselected by you.  There is a cost, but it’s usually just a cut of the generated ad revenue, so at no point will you be in the negative for running podcast advertising.

The next option would be to search for sponsors on your own.  This is generally more intensive than joining ad marketplaces through your podcast hosting site, but it allows you more freedom in how you want to run your ads.  The best way to go about this is to take a look at podcasts that discuss the same topics you do and see who’s advertising with them. Chances are, they’d be ready and willing to sponsor your show as well.

With your own sponsor, you’ll have to figure out how you’d like to insert your ads.  You can either read them organically during your recording of your audio, or you can dynamically insert them after the recording.  Dynamic insertion is discussed later in the article.

How does podcast advertising work?

Preroll and postroll audio sort of run the same route, and tend to run 15-30 seconds on average.  Midroll ads, on the other hand, run 30-90 seconds on average, and have the added benefit of letting control how the ad flows in your content.  Not to imply that you can’t control the flow of your preroll or postroll ads, or that the flow is automatically there if you choose to to insert your ads at the midroll point, but there are unique opportunities that make the midroll ad a more desirable slot for advertisers and sponsors.

In fact, that spot is so desirable that the industry standard pay for a midroll slot is about $25-$50 per CPM, while the standard industry pay for preroll and postroll ads runs about $18-$25.  Not solely because it’s longer, but because it has the chance to be more smoothly inserted in your content to explain its story and invite a call-to-action that’s less rushed than the preroll and postroll slots.

Quick sidenote: what’s CPM?  CPM is basically advertising slang for 1000 downloads or impressions.  So when a sponsor offers a 40-second midroll slot for $35 per CPM, that’s $35 paid to you for every 1000 downloads or plays of the content that the ad plays in.  So if your podcast episode gets a solid 2000 plays and has just the one ad, that’s $70 for that ad for that episode.

This could also include if your content is downloaded and only partially played through.  Studies show that the majority of people finish a podcast episode they start, so it might not be something to worry about, but if for any reason they episode only partially plays it still counts towards that CPM.

How to manage your ad campaign and insert your ads

Your advertisers will pay for campaigns that run a specific length – say, for eight episodes, or for all the episodes of a two-month period.  There are different ways to insert your ads, but the two main ways to do it would either be dynamic insertion or host-read.

Host-read advertising is recorded inside the content at the same time as the podcast.  It’s incorporated into the script to match the same tone and flow as the episode, and works in the same way as Mack Weldon’s ad in Comedy, Bang! Bang!  The downfall is that the content is permanently part of the content, and can’t be switched out or removed as the episode ages.  This could lead to confusion with listeners over deals, promos, or discount codes offered.

Dynamically-inserted ads can be read/recorded by the host, but they differ in that you can insert them after they’ve already been uploaded to your host website.  You preset specific times for the ads to be inserted, or even insert the ads as you upload the episode. This allows you to change the ads as the episode ages, or even monetize your back episodes.  This option works best for those who have their own sponsors found outside of the ad marketplaces within hosting sites, or for podcast networks that wish to cross-promote across multiple channels.

There is also a chance that your chosen hosting site might charge a fee for dynamically inserting the ads, but they’re usually minimal and take from the money per CPM the ad is paying.  (Podbean, for example, only asks for $1 per CPM for the dynamic ad insertion.)

Preparing your podcast for ads

Even if you don’t plan on monetizing your podcast tomorrow, it bodes well to plan on doing it at some point in the future.  Not only does it give you the chance to practice how you want to prepare for your episodes, it gives you the option to monetize your back episodes.  You will already have done the footwork of making sure there’s a specific spot to insert the ad, so when the time comes all you have to do is opt it in for dynamic insertion, or manually insert the ad.

The best way to prepare your podcast for advertising is to keep in mind where the natural breaks of your content lie, and to make sure you’re not cutting your content in a way to make it sound disjointed upon playback with the podcast ads.  By giving yourself that clear break, and making sure it’s clean and doesn’t cut off any speech in your audio, you make that episode a good candidate for monetization in the future.

Ten years ago, five years ago, even one year ago, podcast advertising was a mere shadow of what it is now.  It’s ever-growing, ever-increasing in leaps and bounds. Willardson of Mack Weldon even said that this 25% they now spend each month on podcast advertising is 100 times what they spent this time last year.  It’s changing the way people think of advertising and marketing, and how they tell the story behind their services and products. And it can change the way you think about your podcast.

With podcast advertising and monetization, you can turn your podcast into something that supports itself and in time, supports you – in more ways than one.