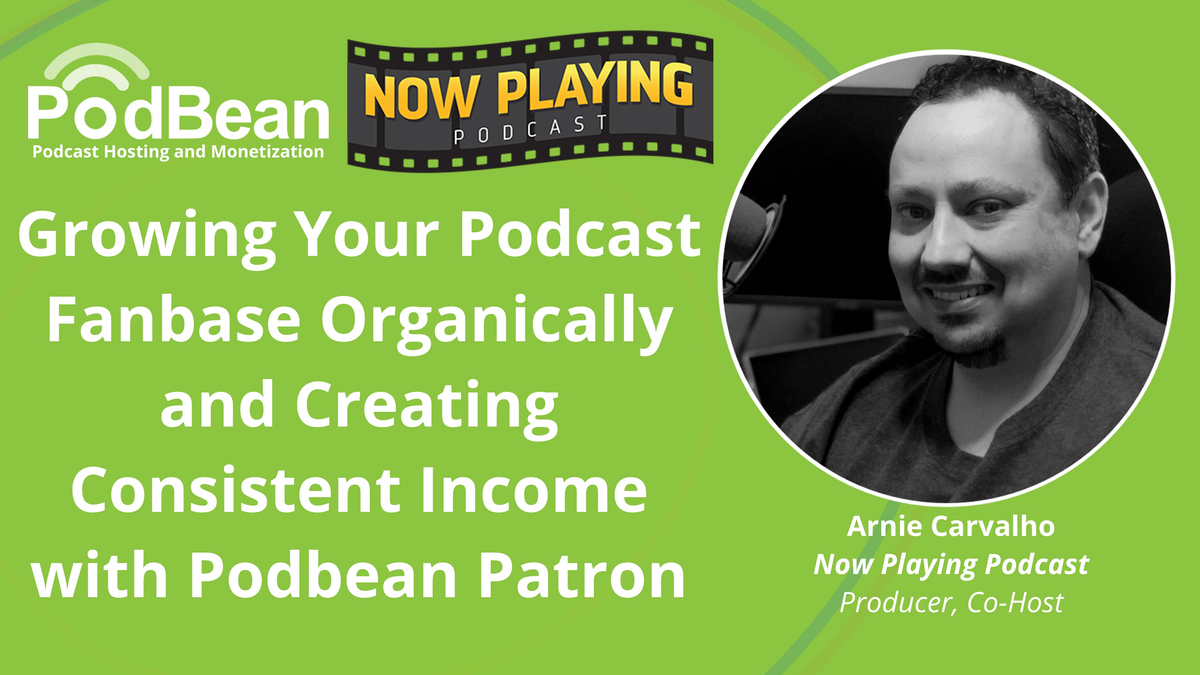 Arnie, producer and co-host of the Now Playing Podcast and our Head of Marketing John Kiernan recently spoke about how Now Playing organically grew their expansive fanbase. They also discussed how they’ve used Podbean’s Patron program to create consistent monthly income for their podcast. Check out our blog post below and the full podcast episode at the below video!

Podcasting is not a new phenomenon, and with everyone’s focus on getting started, it’s easy to forget that there are podcasters who have been in the podcasting game for quite some time. Take, for example, the film review podcast Now Playing. Not only do they have a huge, dedicated fanbase, but they’ve also been podcasting for over a decade.

“Now Playing is a movie review podcast that started back in 2007, so we’ve been doing this for quite a while, 13 years, and we started with just new movie release reviews. But in 2009, I think we really hit our stride with doing retrospective series reviews. So it started with Friday the 13th – they were coming out with that reboot – and so leading up to the reboot we reviewed every movie in the Friday the 13th series. And then came the Star Trek reboot soon after, so we did every movie in the Star Trek series, every movie in the Terminator series, Halloween.

The content stays interesting due to the multiple hosts that bring in differing views of media’s place in the world.

We’ve got a 3-person rotating panel of hosts, usually though it’s myself, my longtime friend Stewart who went to film school and provides a lot of analysis for these films, and then Jacob who’s a friend of ours who has studied philosophy and literature. So we all bring different perspectives to these reviews.

Most importantly, they’ve crafted and created their content with the whole goal of meeting their audience’s needs. Even with the pandemic and more people staying home over going out, Now Playing offered new experiences to their audience to keep them coming back.

What we’ve done is been very organic. It’s been interaction with our listeners through social media, through email, doing some live shows. When theaters were closed last year, we ended up doing some livestreaming watch parties because people like to go to the movies with their friends, and if you couldn’t go to the actual movies, we did a livestream where we and our listeners watched Friday the 13th Part 8 together. Just trying to keep engaged, and consistent output. I find that as a podcast listener and as a podcast producer, one of the things that really helps is reliability with the audience. And we have not gone without releasing a new show on Tuesdays since early 2011. And that is every Tuesday, Tuesday is sometimes Christmas Day, Tuesday is sometimes my birthday, and every Tuesday we have a brand new show out there.

This dedication to their audience has cultivated an audience that’s dedicated to them and their content in turn. Now Playing’s Patron page and its five-figure monthly pledge total is the evidence that everything they’ve done to create a great experience for their audience has been successful.

The Patron stream is the primary income stream for Now Playing. We were self-hosted for many, many years of the podcast. I’m a web developer, we just set up a web server and went with it. When we decided to look at other podcast hosts, one of the questions I really had was, a lot of other people were using other crowdfunding platforms, and so I was trying to look at those, but also look at being able to offer shows in a variety of different ways. Having exclusives for patrons, being able to take some of our exclusive bonus shows from years past and make those available again.

Being able to say, “Okay, go to the Podbean site or download the Podbean app,” and be able to get all the bonus content through one place is a lot more helpful. And to be honest, because we have great listeners who support our show, one of the areas where we have some trouble is maintaining technical support, y’know, when we were offering bonus shows manually, there’d be a lot of, “I lost my shows, can you send them to me again?” That kind of thing. And being able to just rely on Podbean support – which I found to be responsive and friendly, I say that every time because I like to be one stop. If somebody emails me a question, I like to be able to email back an answer, and I feel bad when I say, “Go over here,” but I always say that Podbean support is there to help you, they respond usually very quickly, they’re very helpful, and they can help you with whatever issue you’re having listening to your show better than I can.

You can find out more about Now Playing by checking out their podcast, their Patron page, and the rest of their interview on Podcasting Smarter!