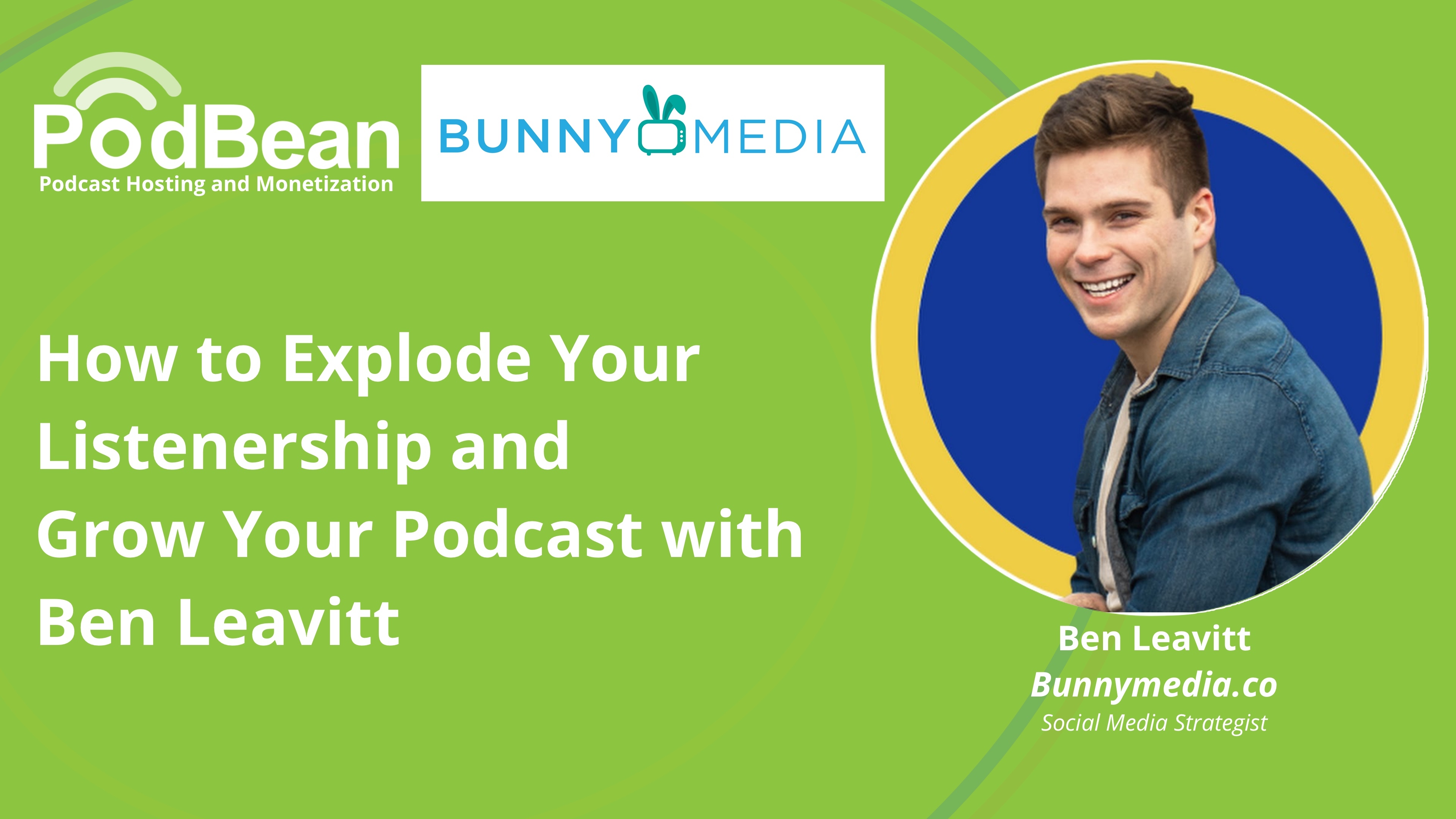 One of the more challenging parts of podcasting is the journey to grow your podcast fanbase and listenership. As we create our content, we’re often left wondering who will enjoy it, and how they’ll discover it out in the sea of content that already exists. One thing we can do to make the best use of the platforms available to us is to know how to properly engage on them. Ben Leavitt has built a content empire out of helping people do just that. In fact, his goal with his content is to help other podcasters and content creators as they look for their audience.

In our interview with us for Podcasting Smarter, he says, “So what I do professionally is I’m a podcaster, and I’m also a social media strategist. I run a social media agency to help people grow audiences and communities.”

Despite having such a wide range of platforms and places that he can be found, his podcast is where he finds most of his value, and inspired him to help others grow their podcast and find their audiences.

“Podcasting is definitely near and dear to my heart; I’d say the first piece of content that broke through for me was my beginner’s guide to podcasting I made about two or three years ago. I made that over on Youtube. The reason why I did it was because I was podcasting and I took so much value from having a show but I made so many mistakes along the way, so I wanted to share that in a video, and it resonated with people. And that was the first big break I had on Youtube.”

The success he finds on other platforms lies in the fact that he creates content catered to each particular platform.

“I think a lot of people put their time in places that aren’t the best to put it, or they don’t have the patience to understand what they’re working towards, and also the importance of designing specifically for a platform. So if you’re looking to leverage other platforms like Instagram, like Youtube, it’s really important to design specific to how people want to consume there. That’s what’s really important if you’re looking to leverage those places. I think a lot of people will just throw up an audiogram and then be mad that it didn’t just blow up on Instagram. And you have to think about what you’re competing against, right? So I think you’re doing yourself a disservice if you don’t put the additional time in to create something specific to the platform. I know it’s more work, but it’s one of those things where I’d rather do it right and put more work forward than continue to do it wrong and not see any time back.

“If you have a budget or the time, I think it’s a must if you have those two things – I understand that not everyone’s in that situation. But once you get there, I think it’s something that you should absolutely be doing because of one of the fundamental flaws in podcasting. I think it’s exceptional – I love podcasting, it’s one of my favorite mediums – but they have not nearly improved or perfect discovery. It’s very difficult for people to still find your show. People are working to improve that, like the Podbean app and things of that nature, but it’s still not where it is on social media platforms. These algorithms are engineered to get content in front of people who want it. So not leveraging those, in my opinion, would be silly – again, this all comes down to having the bandwidth for it. But Youtube specifically, why I think it’s so awesome for podcasting, is because you can have the main full-on full-length episode, but you can also cut that up into a bunch of different micro-clips, and that has really been the key, the backbone of some of the most successful shows because it does everything that Youtube wants.”

Success can be found by any podcaster, according to Leavitt, no matter their size. In fact, even podcast guests don’t really concern themselves with how large a podcaster’s audience really is. This works in your favor, allowing you to search out big-name guests that could potentially help you get more listeners to grow your podcast.

“You’d be surprised at how few people will actually ask for your numbers in general. So I think  that it more comes down to how you present yourself and how you position the opportunity to come on your show. So it doesn’t matter who you are! Even if you have a smaller show, there’s something that you can do to make the exchange valuable to the other person. For one, everybody on this planet likes to talk about themselves, so you’re giving them that airtime to talk about themselves. That is something that’s valuable to them, it does carry some weight.”

The important thing when looking to grow your podcast, however, is to ensure that your audience can find you. And that means dipping into SEO, or “search engine optimization.”

“If people are coming to find you – and I’ve already mentioned that discovery is somewhat lacking on podcasting at large – if they can’t find you when they type in the name of your show even, then that’s a serious problem. Your show name may sound fantastic, but if it’s in a super competitive field with hundreds of shows with almost the exact same name, you’re not really giving yourself much of an opportunity there to even be found. So I think a way you can go about doing that is ensuring that your SEO principles are in place. This is something that even my show needs to improve upon, to be honest with you, but it is something that everybody should be putting a bit of time into. It’s one of those things where like, if you’re already going to have the show up and running, why wouldn’t you have it packaged the best way to be found the most frequently?

“I think also typing the name of your show into Google and the podcast apps and seeing if people could find you – a lot of people will be surprised, that you’re not the first thing to come up even when people type in your exact podcast name. For context, my show used to be called “Project Passion.” I typed that in I wouldn’t even find my own show. I typed it word for word, my show! And that’s a problem! That partially had  to do with poor SEO at the time, and also the fact that it is a very competitive two-word combination. So I decided to change the name of my show. And since doing that, it’s a little easier to find me now, and that’s huge.”

One tip to assist with that as you grow your podcast? Something Leavitt calls the “three episode principle” for publishing your first podcast episodes.

“That’s a huge tactic that still works to this day, and if done successfully can be a huge momentum driver for your show. The three-episode principle, it works for a few different reasons. I think outside of the podcast app and how it functions, it shows that you’re going actually have to put more of the time in and make this a thing. I know that so many people on your Facebook feed and over Instagram start something and then go away after one episode, so it shows people that you’re trying to reach out to that you’re serious about it by having those three episodes. But more of a platform-specific reason for why that is so important is because during the new phase of your show, if people listen to your episodes – if they listen to all three – all of that is viewed as unique viewership (or listenership) in the eyes of Apple Podcasts, and that helps you tremendously. So they’re not tracking independent download numbers to dictate the charts, they’re seeing increases in viewership and the rate at which that happens. So if you’re a brand new show and you have one episode, that’s great, but if you have three? That can be three times as great and three times as valuable in terms of how Apple Podcasts ranks their categories.”

To learn more about Ben Leavitt’s approach to how to find your audience, grow your podcast, and get more listeners, check out the rest of the interview on Podcasting Smarter or over on Youtube! You can also find Ben Leavitt on Twitter and Instagram!